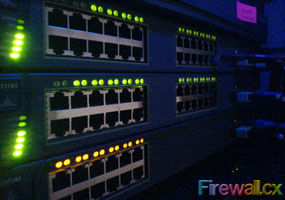 A long-long time ago (not long ago in earth time) 100 Meg was THE technology. 100 Meg uplinks bundled with ether-channel was the ultimate uplink technology. This was the prevailing technology during the tech boom. Gigabit Ethernet was up and coming.

Fast forward to today and we are looking forward to deploying 40Gbps. Every now and then we hear in the news about deployment of 100 Gbps links. The very fact that it is newsworthy tells us that it is not common.

Cisco says that mobile data traffic alone will increase 13X (thirteen times) over the next four years and will outpace the global fixed data traffic by a factor of 3 by 2017.

These trends have prompted IEEE to consider the Ethernet solution beyond the 100G, which is just coming to the market.

Large Hadron Collider at CERN generates 1Petabyte of data/sec (a Peta  has 15 zeros and is also called a quintillion). Of course, they cannot store all of it and so they filter it to keep INTERESTING data only, which is still about 25 Peta Bytes per year (1000 years’ worth of DVDs). This data is sent out by CERN to 11 Tier 1 institutions around the globe for analysis

Keeping all this in mind, I was intrigued to read that in Feb 2013 400 Gbps per wavelength had been deployed between the French Cities of Paris and Lyon. The link actually uses 44 such wavelengths to achieve 17.6 Tbps of traffic in total. To give you an idea, at 17.6Tbs you can transfer 44 Blu-ray discs each second.

The work on ratification of 100G was started in 2006 when there were no smartphones as we know them today.

The latest news (March 2013) is about Fujitsu creating newer modulation demodulation technology that can use the standard, widely available hardware used in 10 Gbps networking to transmit 100 Gbps of data on a single channel. Combining four streams of 100 Gig each to an optical transceiver would result in a 400Gbps Ethernet transceiver.

This made me very curious and I looked further to see that researchers at AT&T labs had achieved this feat of sending 400 Gbps over fiber an extremely long distance. Can you guess, how long? It is 12000Km, which is approximately 7500 miles. This broke their old record of 9000Km. This is exciting because it increases the reach by a factor of 2.5.

Previously this group had concluded that by 2015 networks would need to support the capacity of 1Tbps and by 2020 to support 10Tbps, however, in September 2012, they decided to focus on 400G.

The reason for this was that 400G was immediately feasible technically and economically. Any of these speeds could be achieved by bundling multiple connections together. This will get expensive and cumbersome especially over copper. For 400G you will need 16 pathways of 25-gigabit connections. This increases to 40 pathways of 25-gigabit connections for 1TbE, making these full duplex would double the connections. Imagine a copper cable that will be very short for these speeds and would be potentially 2 or 3 inches in diameter. Datacenter physical infrastructure will surely need reinforcement to run multiple runs of these cables.

My concern is that 400G may end up slightly unpopular like 40G because the market will decide to aggregate 10 Gbps ports instead of buying new hardware.

In March 2013 five leading global companies intend to enter into a multi-source agreement (MSA) to create a 400Gbps pluggable module for the industry. These companies are

This article was written because history was created and all network engineers like us are a proud part of this history.

Vivek Tiwari holds a Bachelor’s degree in Physics, MBA and many certifications from multiple vendors including Cisco’s CCIE.  With a double CCIE on R&S and SP track under his belt he mentors and coaches other engineers.

Vivek has been working in the Inter-networking industry for more than fifteen years, consulting for many Fortune 100 organizations. These include service providers, as well as multinational conglomerate corporations and the public sector. His five plus years of service with Cisco’s Advanced Services has gained him the respect and admiration of colleagues and customers alike.

His experience includes, but is not limited to, network architecture, training, operations, management and customer relations, which made him a sought after coach and mentor, as well as a recognized leader.

If you would like to know more about Vivek, his Cisco double CCIE certification success story and path taken to reach his lifetime goals, read our interview with Vivek Tiwari.

He is also the author of the following titles:

“Your CCNA Success Strategy Learning by Immersing – Sink or Swim”