By now you can see the limitations of a simple hub and when you also read about Ethernet, you start to understand that there are even more limitations. The companies who manufacter hubs saw the big picture quickly and came out with something more efficient, bridges, and then the switches came along! Bridges are analysed later on in this section.

As we mentioned earlier, hubs work at the first layer of the OSI model and simply receive and transmit information without examining any of it.

Switches (Layer-2 Switching) are a lot smarter than hubs and operate on the second layer of the OSI model. What this means is that a switch won't simply receive data and transmit it throughout every port, but it will read the data and find out the packet's destination by checking the MAC address. The destination MAC address is located always at the beginning of the packet so once the switch reads it, it is forwarded to the appropriate port so no other node or computer connected to the switch will see the packet.

Switches use Application Specific Integrated Circuits (ASIC's) to build and maintain filter tables.
Layer-2 switches are alot faster than routers cause they dont look at the Network Layer (thats Layer-3) header or if you like, information. Instead all they look at is the frame's hardware address (MAC address) to determine where the frame needs to be forwarded or if it needs to be dropped. If we had to point a few features of switches we would say:

Below is a picture of two typical switches. Notice how they looks similair to a hubs, but they aren't. It's just that the difference is on the inside! 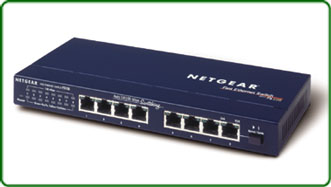 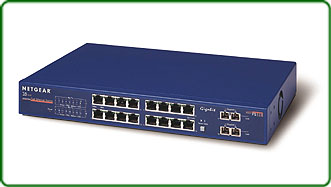 All switches regardless of the brand and various enhancements they carry, have something in common, it's the three stages (sometimes 2 stages) they go through when powered up and during operation. These are as follows:

Let's have a look at them to get a better understanding!

When a switch is powered on, the MAC filtering table is empty. When a device transmits and an interface receives a frame, the switch places the source address in the MAC filtering table remembering the interface the device on which it is located. The switch has no choice but to flood the network with this frame because it has no idea where the destination device is located.

If a device answers and sends a frame back, then the switch will take the source address from that frame and place the MAC address in the database, associating this address with the interface that received the frame.

Since the switch has two MAC addresses in the filtering table, the devices can make a point-to-point connection and the frames will only be forwarded between the two devices. This makes layer-2 switches better than hubs. As we explained early on this page, in a hub network all frames are forwarded out to all ports every time. Most desktop switches these days can hold upto 8000 MAC addresses in their table, and once the table is filled, then starting with the very first MAC entry, the switch will start overwritting the entries. Even tho the number of entries might sound big .. it only takes a minute or two to fill it up, and if a workstation dosen't talk on the network for that amount of time, then chances are that its MAC address has been removed from the table and the switch will forward to all ports the packet which has as a destination this particular workstation.

And after the first frame has been successfully received by Node 2, Node 2 sends a reply to Node 1, check out what happens:

Notice how the frame is not transmitted to every node on the switch. The switch by now has already learned that Node 1 is on the first port, so it send it straight there without delay. From now on, any communication between the two will be a point-to-point connection :

It's always a good idea to have a redundant link between your switches, in case one decides to go for a holiday. When you setup redundant switches in your network to stop failures, you can create problems. Have a look at the picture below and I'll explain:

Things will work fine until a broadcast come along and causes alot of trouble. For the simplicity of this example, I am not going to show any workstations, but only the server which is going to send a broadcast over the network, and keep in mind that this is what happens in real life if your switch does not support Spanning-Tree Protocol (STP), this is why I stuck the "Optional" near the "Loop Avoidance" at the start of this section:

It might look a bit messy and crazy at a first glance but let me explain what is going on here.

The Server for one reason or another decides to do a broadcast. This First Round (yellow arrow) broadcast is sent down to the network cable and firstly reaches Port 1 on Switch A. As a result, since Switch A has Port 2 connected to the other side of the lan, it sends the broadcast out to the lower section of the network, this then is sent down the wire and reaches Port 2 on Switch B which will send it out Port 1 and back onto the upper part of the network. At this point, as the arrows indicate (orange colour) the Second Round of this broadcast starts. So again... the broadcast reaches Port 1 of Switch A and goes out Port 2 back down to the lower section of the network and back up via Port 2 of Switch B. After it comes out of Port 1 of Switch B, we get the Third Round (Cyan arrow), and then the Fourth Round (pink arrows) , Fifth Round (blue arrows) and keeps on going without stopping.....! This is what we call a Broadcast Storm.

A Broadcast Storm will repeat constantly, chewing up the valueble bandwidth on the network. This is a major problem, so they had to solve it one way or another, and they did... with the Spanning-Tree Protocol or STP in short. What STP does, is to find the redundant links, which this case would be Port 2 of Switch B and shut it down, thus eliminating the posibility of looping to occur.

At the begining of this page we said that the switches are fast, therefor have low latency. This latency does vary and depends on what type of switching mode the switch is operating at. You might recall seeing these three switching modes at the beginning: Store & Forward, Cut-ThroughandFragment Free.

The picture below shows how far the different switching modes check the frame:

So what does this all mean ? Switching modes ? I Don't understand !

The fact is that switches can operate in one of the three modes. Some advance switches will allow you to actually pick the mode you would like it to operate in, while others don't give you any choice. Let's have a quick look at each mode:

This is one of the most popular swtiching methods. In this mode, when the switch receives a frame from one of it's ports, it will store it in memory, check it for errors and corruption, and if it passes the test, it will forward the frame out the designated port, otherwise, if it discovers that the frame has errors or is corrupt, it will discard it. This method is the safest, but also has the highest latency.

Cut-Through switching is the second most popular method. In this mode,the switch reads the frame until it learns the destination MAC address of the frame it's receiving. Once it learns it, it will forward the frame straight out the designated port without delay. This is why we say it's -Real Time-, there is no delay or error checking done to the frame.

Just keep one important detail in mind: When you go out to buy a switch, make sure you check the amount of memory it has. Alot of the cheap switches which support the Store & Forward mode have very small amounts of memory buffer (256KB- 512KB) per port. The result of this is that you get a major decrease in performance when you have more than 2 computers communicating via that switch cause there isn't enough memory to store all incoming packets (this also depends on th swtiching type your switch supports), and you eventually get packets being discarded.

The table below is a guide on what amounts of memory you should be looking at for switches of different configuration :

Bridges are really just like switches, but there are a few differences which we will mention, but not expand upon. These are the following:

That's pretty much as far as we will go with the bridges since they are pretty much old technology and you probably won't see many around.

Back to Network Fundamentals