Here we will talk about hubs and explain how they work. In the next section we will move to switches and how they differ from hubs, how they work and the types of switching methods that are available; we will also compare them.

Before we start there are a few definitions which I need to speak about so you can understand the terminology we will be using.

Domain: Defined as a geographical area or logical area (in our imagination) where anything in it becomes part of the domain. In computer land, this means that when something happens in this domain (area) every computer that's part of it will see or hear everything that happens in it.

Broadcast Domain: A domain where every broadcast (a broadcast is a frame or data which is sent to every comeputer) is seen by all computers within the domain. Hubs and switches do not break up broadcast domains. You need a router to achieve this.

Hubs and repeaters are basically the same, so we will be using the term "Hub" to keep things simple. Hubs are common today in every network. They are the cheapest way to connect two or more computers together. Hubs are also known as Repeaters and work on the first layer of the OSI model. They are said to work on the first layer because of the function they perform. They don't read the data frames at all (like switches and routers do), they only make sure the frame is repeated out on each port and that's about it.

The picture below shows a few hubs : 8 port Netgear and a D-link hub.

The computers (nodes) connect to the hub using Unshielded Twisted Pair cable (UTP). Only one node can be connected to each port of the hub. The pictured hub has a total of 8 ports, which means up to 8 computers can be networked.

When hubs were not that common and also expensive, most offices and home networks use to install coax cable.

The way hubs work is quite simple and straightforward: When a computer on any one of the eight ports transmits data, this is replicated and sent out to the other seven ports. Check out the below picture which shows it clearly.

Node 1 is transmitting some data to Node 6 but all nodes are receiving the data as well. This data will be rejected by the rest of the nodes once they figure out it's not for them.

This is accomplished by the node's network card reading the destination MAC address of the frame (data) it receives, it examines it and sees that it doesn't match with it's own and therefor discards the frame. Please see the Datalink layer in the OSI section for more information on MAC addresses.

Most hubs these days also have a special port which can function as a normal port or as an "uplink" port. An uplink port allows you to connect another hub to the existing one, increasing the amount of ports which will be available to you. This is a cheap solution when you need to get a few more computers networked and it works quite well up to a point.

This is how 2 eight port hubs would look when connected via the uplink port and how the data is replicated to all 16 ports :

In the above picture you can see that Node 1 is again transmitting data to Node 6 and that every other node connected to the hub is receiving the information. As we said, this is a pretty good and cheap solution, but as the network gets busier, you can clearly understand that there is going to be a lot of unecessary data flowing all over the network. All Nodes here are in the same broastcast and collision domain since they will hear every broadcast and collision that occurs.

This is the same situation you get when you use coax cable, where every node or computer is connected onto the same cable and the data that's put onto it travels along the cable and is received by every computer.

You probably also noticed the two orange boxes labled "50 Ohm". These are called terminating resistors and are used on both ends of the coax cable so when the signal gets to them, it's absorbed by them and that way you don't get the signal reflecting back. Think of them as shock absorbent and the data signal is the shock wave which gets absorbed when it reaches the terminating resistors. The coax cable can be up to 185 meters and can contain no more than 30 nodes per segment. What you're looking at in the above picture is one segment 25 meters long with 4 nodes attached to it.

Now coming back to the hubs, there are a few standard features most of them have these include a link and activity LED for each port, a power LED and collision LED. Some hubs have separate link lights and activity lights, others combine them into one where the link light will flash when there is activity, otherwise it remains constantly on. The Netgear hub which is displayed at the beginning of this page has two separate LEDs for the activity and link but the Compex hub below has only one. 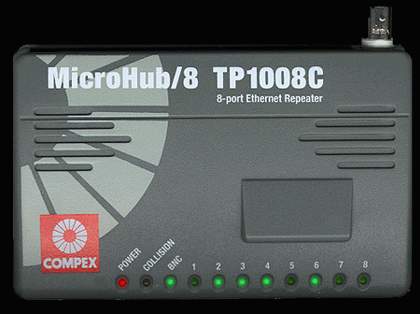 This little hub also contains a special BNC connection so you can connect a coax cable to it. When you do connect it, the BNC light comes on. Notice the label at the top where they have written "8 port Ethernet Repeater". As we already have said, hubs are just simple repeaters.

The collision light on the hubs will only light up when a collision is detected. Collision is when 2 computers or nodes try to talk on the network at the same time. When this happens, their frames will collide and become corrupted. The hubs are smart enough to detect this and will light up the collision LED for a small amount of time (1/10 of a second for each collision). If you find yourself wondering why couldn't they make things work so more than two computers can talk on the network, it would be advisable to visit the Ethernet section where all this is explained in detail. Collisions and the fact that only one computer can talk on the network at any given time along with the cabling rules are all part of the Ethernet rules. Remember that any node connected to a hub becomes part of the same collision domain.