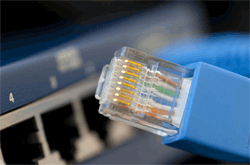 The 10Base-T UTP Ethernet and 10Base-2 Coax Ethernet were very popular in the early to mid 1990's when 100 Mbps network cards and hubs/switches were very expensive. Today's prices have dropped so much that most vendors don't focus on the 10Base or 100Base networks but the Gigabit Ethernet networks which also provide backwards support for 100Base-T and 10Base-T standards. Generally speaking, the 10Base-T and 10Base-2 standards are not used anymore today, however having a good understanding on these old standards is still considered valuable.  Finally, we'll also briefly speak about 10Base-5, 10Base-F and 10Base-35 network standards.

To make it simpler to distinguish cables they are categorized: that's how we got CAT1, 2, 3, etc. Each category is specific for speed and type of network. But since one type of cable can support various speeds, depending on its quality and wiring, the cables are named using the "BaseT" to show exactly what type of networks the specific cable is made to handle.

We are going to break the "10 Base T" into three parts so we can make it easier to understand:

The number 10 represents the frequency in MHz (Megahertz) for which this cable is made. In this case it is 10 MHz. The greater the MHz, the greater speeds the cable can handle. If you try to use this type of cable for greater frequencies (and, therefore, speeds) then it either will not work or become extremely unreliable. The 10 MHz speed translates to 10Mbit per second, which in theory means 1.2 Mbps. In practice though, you wouldn't get more than 800 kilobits per second (Kbps).

The word "Base" refers to Baseband. Baseband is the type of communication used by Ethernet and it means that when a computer is transmitting, it uses all the available bandwidth, whereas Broadband (cable modems) shares the bandwidth available. This is the reason cable modem users notice a slowdown in speed when they are connected on a busy node, or when their neighbor is downloading all the time at maximum speed! Of course with Ethernet you will notice a slowdown in speed but it will be smaller in comparison to broadband.

The "T" refers to "Twisted Pair" physical medium that carries the signal. This shows the structure of the cable and tells us it contains pairs which are twisted. For example, UTP has twisted pairs and this is the cable used in such cases. For more information, see the "UTP -Unshielded Twisted Pair" page where you can find information on pinouts for the cables.

A few years ago, the 10 BaseT cables used CAT3 cables, which are used for speeds up to 10Mbit, but today you will find mostly CAT5 cables, which are good for speeds up to 100 MHz or 100 Mbps, these cables are also used for 10 Mbps networks. Only two pairs of the UTP cable are used with the 10Base-T specification and the maximum length is 100 meters. Minimum length between nodes is 2.5 meters.

This specification uses coaxial cable which is usually black, sometimes also called "Thinwire coax," "Thin Ethernet," or "RJ-58" cable. Maximum length is 185 meters while the minimum length between nodes is 0.5 meters. 10Base-2 uses BNC connectors which, depending on the configuration, require special terminators. The 10Base-2 specification is analyzed here in great detail (also contains pictures) if you wish to read more about it.

This specification uses what's called "Thickwire" coaxial cable, which is usually yellow. The maximum length is 500 meters while the minimum length between nodes is 2.5 meters. Also, special connectors are used to interface to the network card, these are called AUI (Attachment Unit Interface) connectors and are similar to the DB-15 pin connectors most soundcards use for their joystick/MIDI port.

Most networks use UTP cable and RJ-45 connectors or Coaxial cable with BNC "T" connectors, for this reason special devices made their way to the market that allow you to connect an AUI network card to these different cable networks.

The picture below shows you a few of these devices: 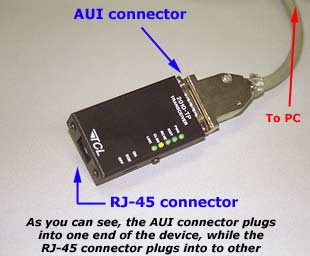 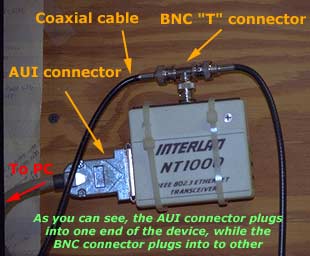 This specification uses fiber optic cable. Fiber optic cable is considered to be more secure than UTP or any other type of cabling because it is nearly impossible to tap into. It is also resistant to electro magnetic interference and attenuation. Even though the 10Base-F specification is for speeds up to 10 Mbits per second, depending on the type of fiber and equipment you use, you can get speeds of up to 2Gigabits per second!

The 10Base-35 specification uses broadband coaxial cable. It is able to carry multiple baseband channels for a maximum length of 3,600 meters or 3.6 Kms.