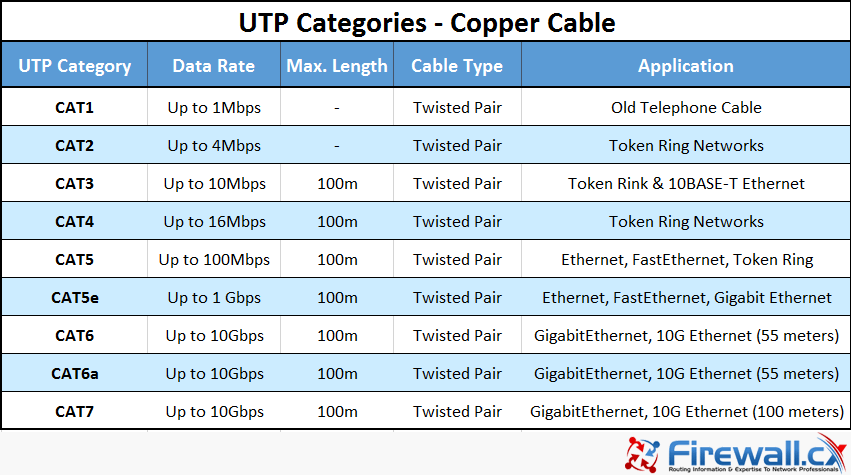 CAT1 is typically used for telephone wire. This type of wire is not capable of supporting computer network traffic and is not twisted. CAT1is also used by telco companies providing ISDN and PSTN services. In such cases the wiring between the customer's site and the telco’s network is performed using CAT 1 type cable.

CAT2, CAT3, CAT4, CAT5/5e,CAT6 & CAT 7 are network wire specifications. This type of wire can support computer network and telephone traffic. CAT2 is used mostly for token ring networks, supporting speeds up to 4 Mbps. For higher network speeds (100 Mbps or higher) CAT5e must be used, but for the almost extinct 10 Mbps speed requirements, CAT3 will suffice.

CAT3, CAT4 and CAT5 cables are actually 4 pairs of twisted copper wires and CAT5 has more twists per inch than CAT3 therefore can run at higher speeds and greater lengths. The "twist" effect of each pair in the cables ensures any interference presented/picked up on one cable is cancelled out by the cable's partner which twists around the initial cable. CAT3 and CAT4 are both used for Token Ring networks -- where CAT 3 can provide support of a maximum 10Mbps, while CAT4 pushed the limit up to 16Mbps. Both categories have a limit of 100 meters.

The more popular CAT5 wire was later on replaced by the CAT5e specification which provides improved crosstalk specification, allowing it to support speeds of up to 1Gbps. CAT5e is the most widely used cabling specification world-wide and unlike the category cables that follow, is very forgiving when the cable termination and deployment guidelines are not met.

CAT6 wire was originally designed to support gigabit Ethernet, although there are standards that will allow gigabit transmission over CAT5e wire.. It is similar to CAT5e wire, but contains a physical separator between the four pairs to further reduce electromagnetic interference. CAT6 is able to support speeds of 1Gbps for lengths of up to 100 meters, and 10Gbps is also supported for lengths of up to 55 meters.

Today, most new cabling installations use CAT6 as a standard, however it is important to note that all cabling components (jacks, patch panels, patch cords etc) must be CAT6 certified and extra caution must be given to the proper termination of the cable ends.

In 2009, CAT6A was introduced as a higher specification cable, offering better immunization to crosstalk and electromagnetic interference.

Organizations performing installations using CAT6 cabling should request a thorough test report using a certified cable analyzer, to ensure the installation has been performed according to CAT6 guidelines & standards.

CAT7 is a newer copper cable specification designed to support speeds of 10Gbps at lengths of up to 100 meters. To achieve this, the cable features four individually shielded pairs plus an additional cable shield to protect the signals from crosstalk and electromagnetic interference (EMI).

Due to the extremely high data rates, all components used throughout the installation of a CAT7 cabling infrastructure must be CAT7 certified. This includes patch panels, patch cords, jacks and RJ-45 connectors. Failing to use CAT7 certified components will result in the overall performance degradation and failure of any CAT7 certification tests (e.g using a Cable Analyzer) since CAT7 performance standards are most likely not to be met. Today, CAT7 is usually used in DataCenters for backbone connections between servers, network switches and storage devices.

The next pages show you how UTP cable is wired and the different wiring schemes. It's well worth visiting and reading about.

Reader interested can also visit our Network Cabling section to select amongst a number of articles covering UTP, X-Over cables, Fiber Optic cables and much more.