Virtualization is an abstraction layer that creates separate distinct virtual environments allowing the operation of different operating systems, desktops and applications under the same or combined pool of resources.   In the past couple of years, virtualization has gained an incredible rate of adoption as companies consolidate their existing server and network infrastructure, in hope to create a more efficient infrastructure that can keep up with their growing needs while at the same time keep the running and administration costs as low as possible.

When we hear the word ‘Virtualization’, most think about ‘server virtualization’ – which of course is the most widely applied scenario, however today the term virtualization also applies to a number of concepts including:

The Hypervisor provides the virtual CPUs, memory and other components and intercepts virtual servers requests to the hardware. Currently, there are two types of Hypervisors:

Type 1 Hypervisor – This is the type of hypervisor used for bare-metal servers. These hypervisors run directly on the physical server’s hardware and the operating systems run on top of it. Examples of Type-1 Hypervisors are Microsoft’s Hyper-V, VMware ESX, Citrix XenServer.

Type 2 Hypervisor – This is the type of hypervisor that runs on top of existing operating systems. Examples of Type-2 Hypervisors are VMware Workstation, SWSoft’s Parallels Desktop and others.

Microsoft introduced its server virtualization platform Hyper-V with the release of Windows Server 2008. Hyper-V is a server role that can be installed from Server Manager or PowerShell in Windows Server 2012.

Hyper-V is a type 1 hypervisor that operates right above the hardware layer. The Windows Server 2012 operating system remains above the hypervisor layer, despite the fact the Hyper-V role is installed from within the Windows Server operating system. The physical server where Hypervisor or Hyper-V server role is installed is called the host machine or virtualization server. Similarly, the virtual machines installed on Hyper-V are called guest machines.

Let’s take a look at the traditional way of server configuration. The figure below shows the typical traditional server deployment scenario where one server per application model is applied. In this deployment model, each application has its own dedicated physical server. 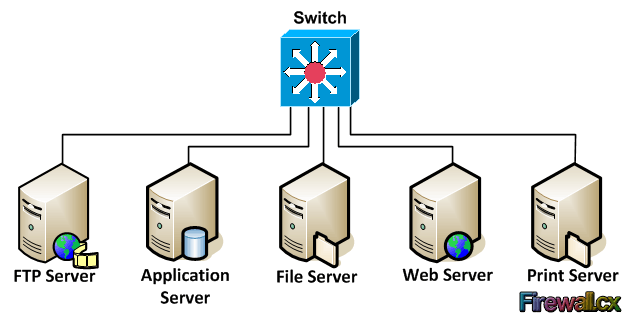 This traditional model of server deployment has many disadvantages such as increased setup costs, management & backup overhead, increased physical space and power requirements, plus many more. Resource utilization of this type of server consolidation is usually below 10%.  Practically, this means that we have 5 underutilized servers.

Virtualization comes to dramatically change the above scenario.

Using Microsoft’s Windows Server 2012 along with the Hyper-V role installed, our traditional server deployment model is transformed into a single physical server with a generous amount of resources (CPU, Memory, Storage space, etc) ready to undertake the load of all virtual servers.

The figure below shows how the traditional model of server deployment is now virtualized with Microsoft’s Hyper-V server:

As shown in the figure above, all the five servers are now virtualized into single physical server. It is important to note that even though these virtual machines run on top of the same hardware platform, each virtual server is completely isolated from other virtual machines.

There are many benefits of this type of virtualized server consolidation. A few important benefits are reduced management overhead, faster server deployment, efficient resource utilization, reduced power consumption and so on.

With the power of network virtualization you can create multi-tenant environment and assign virtual machines or group of virtual machines to different organizations or different departments. In a traditional network, you would simply create different VLANs on physical switches to isolate them from the rest of the network(s). Likewise, in Hyper-V, you can also create VLANs and virtual switches to isolate them from the network in the same way.

Readers can also refer to our VLAN section that analyses the concept of VLANs and their characteristics. 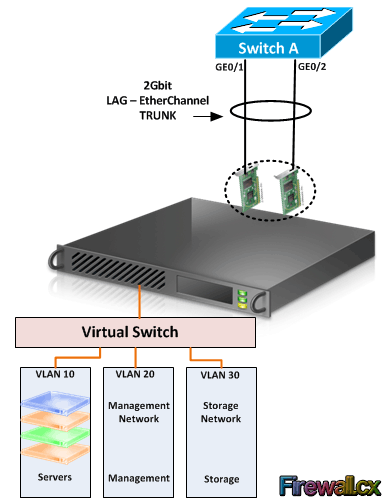 VDI is a new way of delivering desktops to end users. In VDI, virtual desktops are hosted centrally as virtual machines and are provided or streamed to users via the network or Internet using Remote Desktop Protocol (RDP) service. These virtual desktops can be used or accessed by users with different types of devices like, PCs, laptops, tablets, smart phones, thin clients, and so on. VDI have created a new hype of Bring Your Own Device (BYOD) concept. With BYOD policy implemented in the organization, users can bring their own devices like laptops, tablets, etc. and the company delivers the required virtual desktop via the network infrastructure.

VDI is an upcoming trend that offers many advantages such as:

We’ve covered a few of the important virtualization features deployable with Windows Server 2012 and Hyper-V, that allow organizations to consolidate their server, network and desktop infrastructure, into a more efficient model.