Being able to monitor your network traffic is essential when it comes to troubleshooting problems, performing a security audit or even casually checking your network for suspicious traffic.

Back in the old days whenever there was a need to monitor or capture network traffic, a hub would be introduced somewhere in the network link and, thanks to the hub’s inefficient design, it would copy all packets incoming from one port out to all the rest of the ports, making it very easy to monitor network traffic. Those interested in hub fundamentals can read our Hubs & Repeaters article.

Of course switches work on an entirely different principle and do not replicate unicast packets out of every port on the switch, but keep them isolated unless it’s a broadcast or multicast.

Thankfully, monitoring network traffic on Cisco Catalyst switches is a straightforward process and does not require the presence of a hub. The Cisco method is called Switched Port Analyser also known as  SPAN. 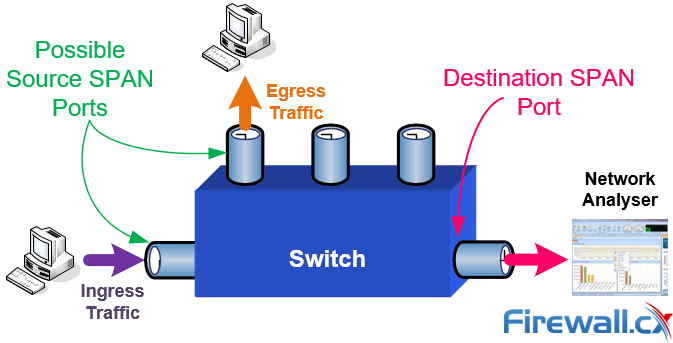 Figure 1. The network diagram above helps us understand the terminology and implementation of SPAN.

The amount of information you can obtain from a SPAN session really depends on how well the captured data can be interpreted and understood. A reliable Network Analyser will not only show the captured packets but automatically diagnose problems such as TCP retransmissions, DNS failures, slow TCP responses, ICMP redirect messages and much more. These capabilities help any engineer to quickly locate network problems which otherwise could not be easily found.

A source port has the following characteristics:

Each SPAN session must have a destination port that receives a copy of the traffic from the source ports and VLANs.

A destination port has these characteristics:

Following are the limitations of SPAN on various Cisco Catalyst switches:

The diagram below represents a typical network setup where there is a need to monitor traffic entering (Ingress) and exiting (Egress) the port to which the router connects (FE0/1). This strategically selected port essentially monitors all traffic entering and exiting our network. 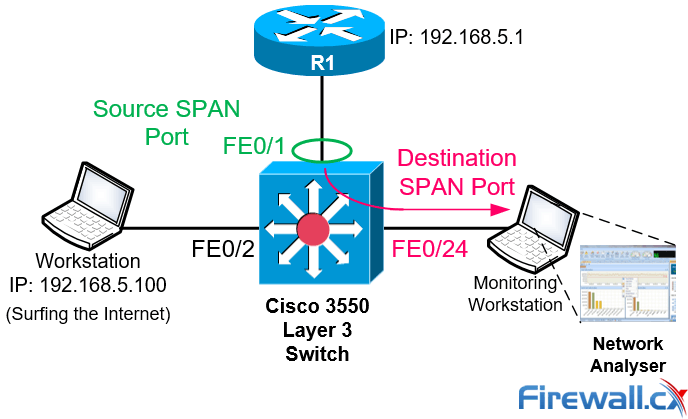 Since router R1 connects to the 3550 Catalyst switch on port FE0/1, this port is configured as the Source SPAN port. Traffic copied from FE0/1 is to be mirrored out FE0/24 where our monitoring workstation is waiting to capture the traffic.

Once we have our network analyser setup and running, the first step is to configure FastEthernet 0/1 as a source SPAN port:

Next, configure FastEthernet 0/24 as the destination SPAN port:

After entering both commands, we noticed our destination’s SPAN port LED (FE0/24) began flashing in synchronisation with that of FE0/1’s LED – an expected behaviour considering all FE0/1 packets were being copied to FE0/24.

To display the detailed information from a saved version of the monitor configuration for a specific session, issue the show monitor session 1 detail command:

Notice how the Source Ports section shows Fa0/1 for the row named Both. This means that we are monitoring both RX & TX packets for Fa0/1, while the Destination Port is set to Fa0/24.

Turning to our network analyser, thanks to its predefined filters we were able to catch packets to and from the worksation monitored: 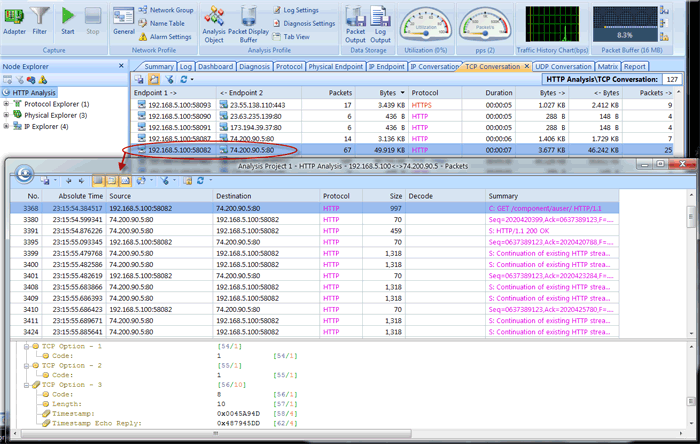 This completes our discussion on SPAN configuration and how to monitor/capture packets on a Cisco Catalyst switch. Upcoming articles will cover RSPAN and more advanced packet capturing techniques using dedicated VLANs for captured traffic and other complex scenarios.