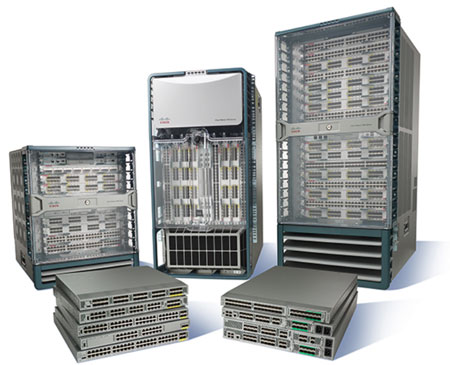 You can compare all available models at the following URL: 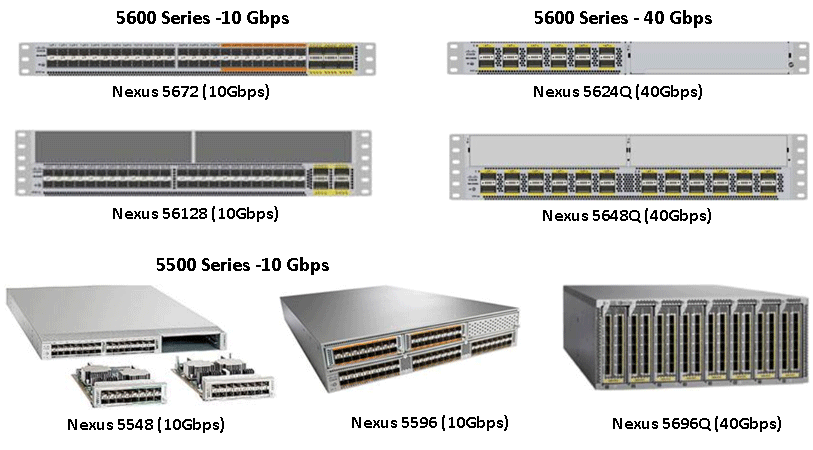 Full comparison of all available models can be found here: www.cisco.com/c/en/us/products/switches/nexus-5000-series-switches/index.html

The product family offers features such as latency of less than a microsecond, line-rate at Layer 2 & 3 unicast, multicast switching, and the support of 40 Gigabit Ethernet interfaces. The Cisco Nexus 3000 Series switches are positioned for use in environments with ultra-low latency requirements such as financial High-Frequency Trading (HFT), High-Performance Computing (HPC) and automotive crash-test simulation Applications. 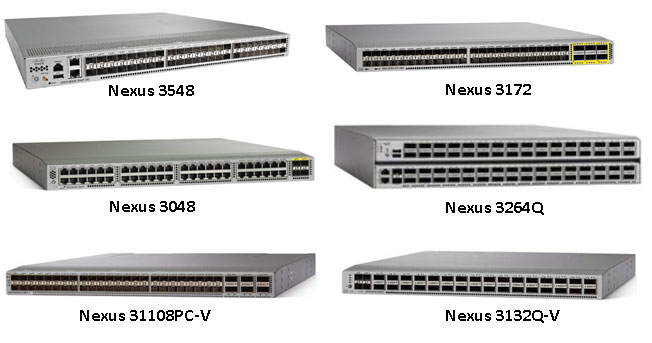 The Cisco Nexus 3000 platform offers more than 15 models to satisfy all the switching needs an organization might have. The Nexus 3000 series offers switches starting with 1GE ports (Nexus 3000) and scales all the way up to 32 port 100GE ports with the Nexus 3232C model. Environments sensitive to delays will surely benefit from this series as they have been designed to practically eliminate any switching latency while at the same time offering large buffer spaces per port. Some models also have the ability to monitor their latency. 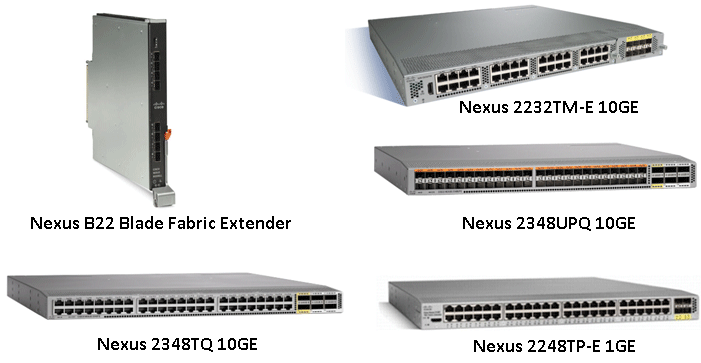 The Cisco Nexus 1000V Series (N1KV) is a software-based switch. It operates inside the VMware ESX hypervisor and utilizes the NX-OS Software. The Nexus 1000v architecture has two components: the Virtual Ethernet Module (VEM) and the Virtual Supervisor Module (VSM). These two components together make up the Cisco Nexus 1000V Series Switch, with the VSM providing the management plane and the VEM providing the data plane.

It should be noted that the Nexus 1000V Essential license is available at no cost and can provide various Layer 2 networking features.

The Cisco NX-OS Software is a data center-class operating system that is built with modularity, resilience, and serviceability as its foundation. It is ideal for implementation within mission-critical data center environments where reliability and fault tolerance are very important.

The NX-OS architecture can perform three different main functions of a Data Center by being able to process Layer 2, Layer 3, and storage protocols. Each service (feature) in NX-OS runs as a separate independent protected process. In particular, each non-kernel process runs in its own protected memory space, providing fault tolerance while isolating any issues that arise with that process. For instance, if a Layer 2 service such as RSTP (Rapid Spanning-Tree Protocol) fails, it will not affect any other services running at that time such as the Layer 3 EIGRP service. In addition, NX-OS is based on the Linux kernel taking advantage of the characteristics offered by the most reliable OS.

Most NX-OS features are not enabled by default to achieve optimum processing and memory utilization, so if it is needed to deploy a technology like UDLD, this feature should be enabled manually. It should be mentioned that NX-OS offers feature testing for a 120-day grace period. Using the grace period enables customers to test a feature prior to purchasing a license.

A network engineer who is familiar with the traditional Cisco IOS command-line interface (CLI) will not face difficulties in using the NX-OS CLI for basic operations. The official Cisco Tool, Cisco IOS to NXOS Configuration Converter, can be helpful for the translation between CISCO IOS and NX-OS. This online tool is free and supports Catalyst 4900-6500 IOS configurations, which can be translated to NS-OS configuration for the Nexus 3000, Nexus 5000, Nexus 6000, Nexus 7000 and Nexus 9000 series.

There are key differences that should be understood prior to getting involved with the Cisco Nexus Operating System (NX-OS), these are highlighted below:

In any case the NX-OS alias command syntax can be used to create an alias for a shortcut. For instance, to use the write IOS command in NX-OS to save the running configuration, the next alias can be used:

The Nexus product family is tailored mainly for Data Center environments and offers the following advantages over Catalyst Core switches:

This section identifies the typical placement of the Cisco Nexus and MDS Families series switches in a Cisco Data Center. 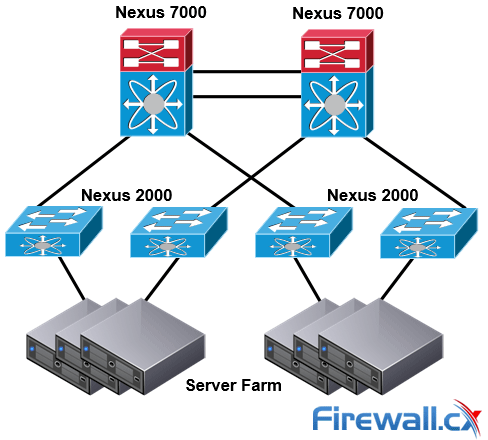 The single-tier data center architecture (shown above) can be expanded by connecting Cisco Nexus 2000 fabric extenders to Cisco Nexus 7000 Series switches to provide connectivity for the servers. It should be mentioned that the Nexus 2000 can be used only to provide connectivity to servers or end hosts and should not be connected with switches.  This setup would provide a Top-of-Rack (ToR) solution for the servers with a Cisco Nexus 7000 Series switch acting as the management point, and collapsing the access, aggregation, & core layers. It should be highlighted that if the budget is limited then the Nexus 9000 is the best alternative to the Nexus 7000. A pair of Nexus 5000 switches in a single-tier setup is a common low cost solution for small Data Centers.

The two-tier data center option connects the Cisco Nexus 2000 Fabric Extenders to an upstream Cisco Nexus 5000 Series switch. The Cisco Nexus 5000 functions as an End-of-Row (EOR) access switch and is connected via multiple links to a pair of Cisco Nexus 7000 switches. This topology provides an access layer and a collapsed core and aggregation layer. 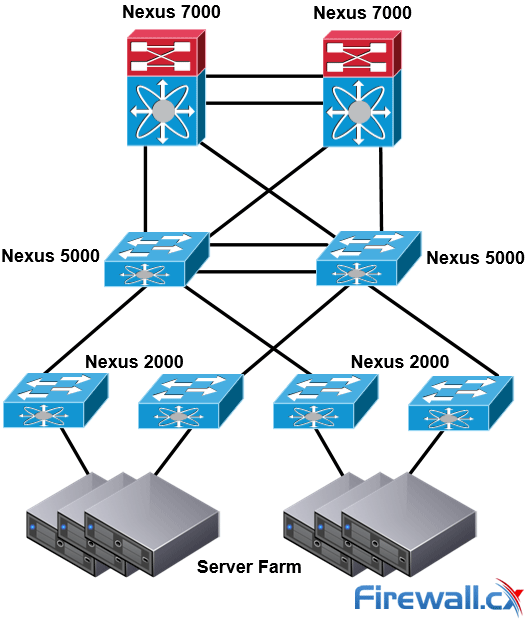 The three-tier data center is similar to the two-tier data center architecture regarding the access layer and the placement of the Nexus 5000 and Nexus 2000 switches. However, multiple Nexus 7000 switches are used to the aggregation layer. The core layer is provided by a pair of Cisco Nexus 7000 Series switches:

The Nexus 9000 switches, due to their exceptional performance and comprehensive feature set, are versatile platforms that can be deployed in multiple scenarios such as  layered access-aggregation-core designs, Leaf-and-spine architecture and Compact aggregation-layer solutions.

This article introduced the Cisco Nexus product family. We explained how the Nexus platform differentiates from the well-known Catalyst switches and examined key-differences in the two platforms and operating systems (NX-OS – IOS).  We analyzed each Nexus series including the well-known MDS 9000 and showed how Single-Tier, Two-Tier and Three-Tier Data Center topologies make use of the Nexus platform. For more information including technical articles visit our Cisco Data Center section.