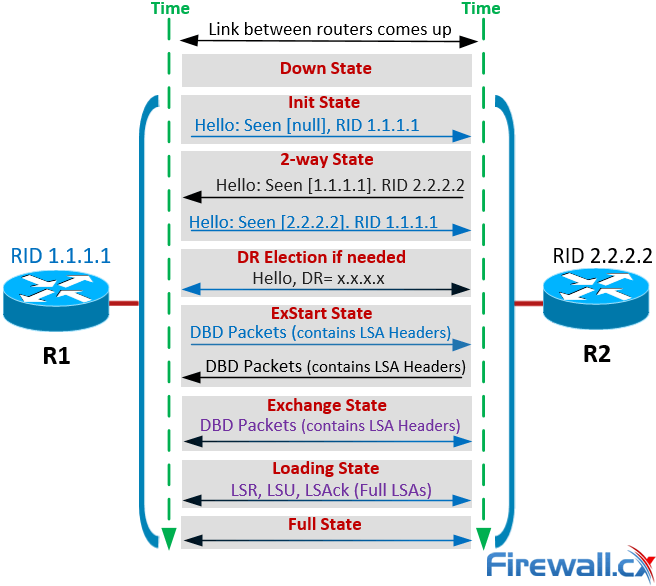 The Down State is the first OSPF neighbor state and means no Hello packets have been received from a neighbor. In an already established OSPF adjacency, an OSPF state will transition from a FULL or 2-Way State to the Down State when the router Dead Interval Timer expires (4 x Hello Interval timer), which means OSPF has lost communication with its neighbor and is now considered non-reachable or dead.

On broadcast media (e.g LAN) and Non-Broadcast MultiAccess (NBMA) networks (e.g Frame Relay, ATM, X.25), a router becomes full state (analyzed below) only with the Designated Router (DR) and the Backup Designated Router (BDR). It will, however, stay in the 2-way state with all other neighbors.

When the 2-Way state is complete, the DR and DBR routers are elected, considering they are on a broadcast or NBMA network.

This state specifies that DR and BDR have been elected and master-slave relation is determined. An initial sequence number for adjacency formation is also selected. The router with the highest router ID becomes the master and begins to exchange Link State data. Only the Master router is able to increment the sequence number.

Link State Updates (LSU) actually act as an envelope that contains all the Link State Advertisements (LSAs) – that have been sent to neighbors with new changes or new networks learned.

Full state is the normal operating state of OSPF that indicates everything is functioning normally. In this state, routers are fully adjacent with each other and all the router and network Link State Advertisements (LSAs) are exchanged and the routers' databases are fully synchronized.