In this article we will examine the Spanning Tree Bridge ID structure, explain why it has increments of 4096, how VLAN information is embedded (for Per-VLAN Spanning Tree & multiple STP instances) via the System ID Extension and finally explain how the Spanning Tree Protocol Root Bridge Election occurs.

In our earlier article we discussed about the Spanning Tree Protocol, Rapid STP port costs and port states. Before STP decides which path is the best to the Root Bridge, it needs to first decide which switch has to be elected as the Root Bridge, which is where the Bridge ID comes into play. Readers interested can also read our STP Principles, Redundant Network Links & Broadcast Storms article.

Every switch has an identity when they are part of a network. This identity is called the Bridge ID or BID. It is an 8 byte field which is divided into two parts. The first part is a 2-byte Bridge Priority field (which can be configured) while the second part is the 6-byte MAC address of the switch. While the Bridge Priority is configurable, the MAC address is unique amongst all switches and the sum of these two ensures a unique Bridge ID.

The above Bridge ID assumes there is one Spanning Tree instance for the entire network. This is also called Common Spanning-Tree (CST).

In order to accommodate the additional VLAN information, the Extended System ID field was introduced, borrowing 12 bits from the original Bridge Priority: 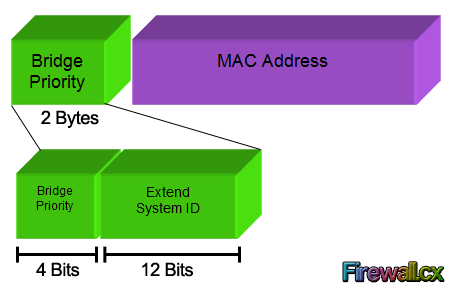 Each BPDU carries several fields in it. The following table defines each field:

For the purpose of this exercise, we will only concentrate on the first three fields.

Let's look at this process using a three switch combination within a network. For the sake of simplicity, the MAC address of each switch has been changed to a simple value: 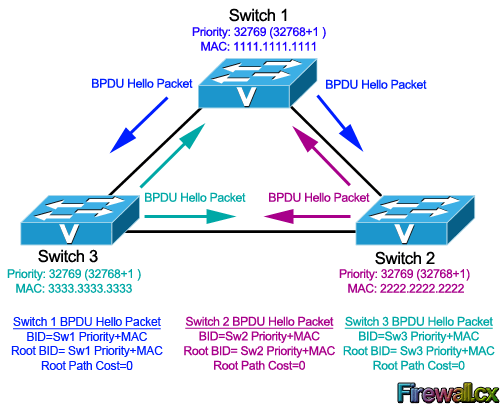 At this point, all switches have received each other's BPDU and have agreed that SW1 has the lowerst BID address and is therefore the rightful Root Bridge of the network. Both SW2, and SW3 now agree that SW1 is Root Bridge, and start organizing their respective links into Root Ports and Designated Ports.

What if we wanted Switch 3 to be the Root Bridge?

In most real-life cases, we need to configure the Root Bridge to ensure that no matter the switch that joins the network, our initial Root Bridge will remain. To achieve this, we simply configure the Bridge Priority so that it is always smaller than the default value of 32769.

Configuring a new BID in a production network is not recommended unless every caution has been taken to ensure network downtime is eliminated. When the BID of a switch changes to make it a Root Bridge, the whole network (switches) will react upon this and begin recomputing the new information. Depending on where the new Root Bridge is located, switch uplinks and redundant links might be blocked.

This article analysed the Spanning Tree Protocol Bridge ID structure and its importance. We saw how the Bridge Priority and System ID Extension fields play a primary role in the Root Bridge election within a network.

Back to the Spanning Tree Protocol Section