Spanning Tree Protocol, Rapid STP port costs and port states are an essential part of the STP algorithm that affect how STP decides to forward or block a port leading to the Root Bridge.

Those issues were broadly categorised as follows:

In order to avoid the above situations, Spanning Tree Protocol or STP is implemented. The aim of this protocol and its deployment is to provide a single path of communication between each Ethernet segment (e.g a link between two switches). Since the issues discussed in our previous article, and STP itself only relates to switching, our discussion will only refer to switches. It is worth noting that both bridges and switches make use of the STP protocol.

Now before we start looking into what criteria STP uses to put a port in Forwarding or Blocking state, let’s understand certain terminologies using the network diagram below: 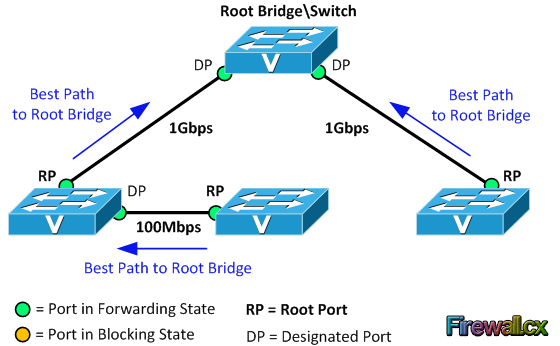 Root Bridge: A switch with all its ports placed in Forwarding state is a root bridge. The Root Bridge is often called Root Switch.

Another way to think of the Root Bridge is as the Master Switch (for loop avoidance matters), for which only one active path must exist from all other switches, effectively avoiding any possible network loops.

Root Port: For a non–root switch, the port that connects this switch to the root switch, with the least cost, is called the root port.

Designated Port: A non – root port, which is forwarding away from the root switch, and has the lowest cost in that Ethernet segment, is called the designated port.

The table below was published by the IEEE group in 1998 and represented the cost against bandwidth: 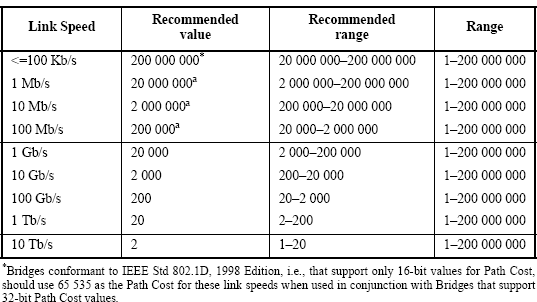 It is absolutely essential to understand that the process of the Root Bridge and non-root switches election along with the port selection is performed only on working interfaces. Any failed/down interface i.e. no cables connected, or an interface which has been shutdown administratively, is parked into an STP Disabled state. Such ports are not considered during STP algorithm deployment.

Now let’s summarise what has been established previously:

In this article we covered Spanning Tree Protocol, Rapid STP port costs and port states. In our next article, we will start looking at how STP deploys the criteria. So, we will understand how STP decides which switch will be the Root Bridge , how it elects the Root Ports and Designated Ports. We will also investigate how STP reacts to any changes to the network topology and incorporates the changes in its algorithm.

Back to Spanning Tree Protocol Section