There are umpteen reasons why your Windows Server 2012 R2 decides to present you with a Blue Screen of Death (BSOD) or the stop screen. As virtual machines become more prominent in enterprise environments, the same problems that plagued physical servers earlier are now increasingly being observed for crashes of virtual machines as well.

Microsoft designs and configures Windows systems to capture information about the state of the operating systems if a total system failure occurs, unlike a failure of an individual application. You can see and analyze the captured information in the dump files, the settings of which you can configure using the System Tool in the Control Panel. By default, BSOD provides minimal information about the possible cause of the system crash and this may suffice in most circumstances to help in identifying the cause of the crash.

However, some crashes may require a deeper level of information than what the stop screen provides – for example, when your server simply hangs and becomes unresponsive. In that case, you may still be able to see the desktop, but moving the mouse or pressing keys on the keyboard produces no response. To resolve the issue, you need a memory dump. This is basically a binary file that contains a portion of the server's memory just before it crashed. Windows Server 2012 R2 provides five options for configuring memory dumps.

A complete memory dump is a record of the complete contents of the physical memory or RAM in the computer at the time of crash. Therefore, this needs a page file that is at least as large as the size of the RAM present plus 1MB. The complete memory dump will usually contain data from the processes that were running when the dump was collected. A subsequent crash will overwrite the previous contents of the dump.

A small memory dump or a MiniDump is a record of the stop code, parameters, list of loaded device drivers, information about the current process and thread, and includes the kernel stack for the thread that caused the crash.

Sometimes you may not want a memory dump when the server crashes.

Windows Server 2012 R2 allows you to configure an Automatic memory dump. To start the configuration, you have to log in as a local administrator and click on Control Panel in the Start menu: 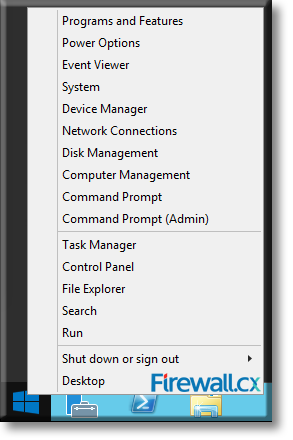 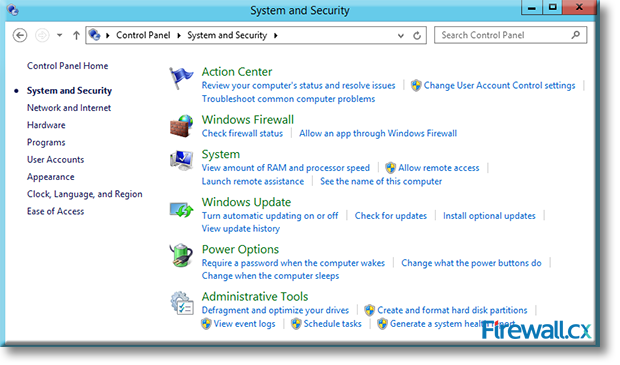 In the System Properties that opens up, click on the Advanced tab as shown below: 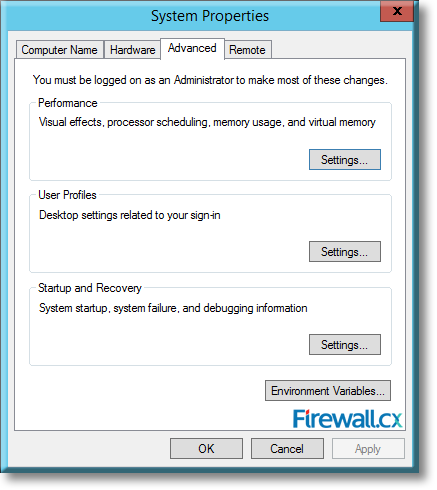 In the Advanced System Properties, look for and click on Settings under Startup and Recovery section: 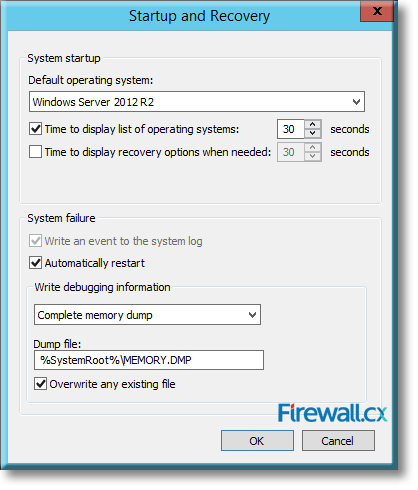 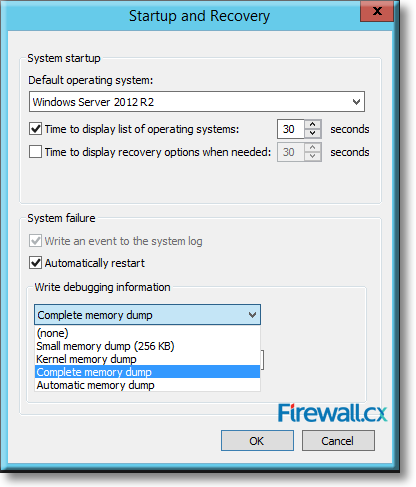 Here, you have the choice to let your server Automatically restart on System failure. Under Write Debugging information, you can select between one of the five types of memory dumps to be saved in the event of a server crash.

You can also define the name of the dump file the server should create and specify its location. The default location is in the System Root and the default name of the file is MEMORY.DMP. If you do not want the previous file to be overwritten by the new dump file, remove the tick mark from Overwrite any existing file (visible in figure 4).

When done, you will need to restart the server for the changes to take place.

Although the server will create the dump files when it crashes, you do not have to wait indefinitely for the crash to occur. As described in Microsoft’s support pages Generating a System Dump via Keyboard and Forcing a System Crash via Keyboard, you can induce the server to crash with a select combination of keys. Of the several methods described by Microsoft, we will discuss the method via USB keyboards.

Forcing a System Crash From the Keyboard

Begin with a command prompt with administrative privileges. For this, begin with the Start menu and click on Command Prompt (Admin): 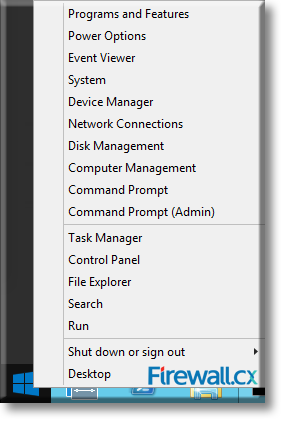 In the command prompt window that opens, type in “regedit” to and hit Enter:

This opens the Registry Editor screen. Now expand all the way to the following section: 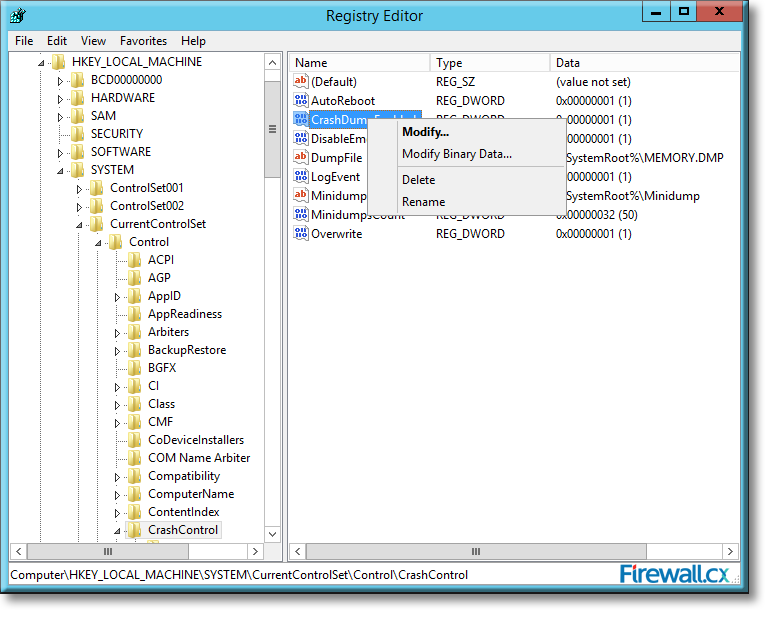 In the Edit DWORD Value dialog that opens enter Value data as 1 and click on OK: 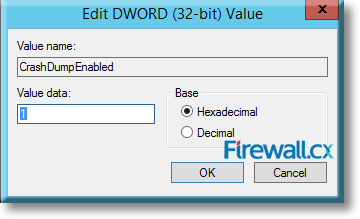 Next step is to go to the following registry location:

Right-click on Parameters and create a new DWORD with the name CrashOnCtrlScroll, which will appear in the right pane: 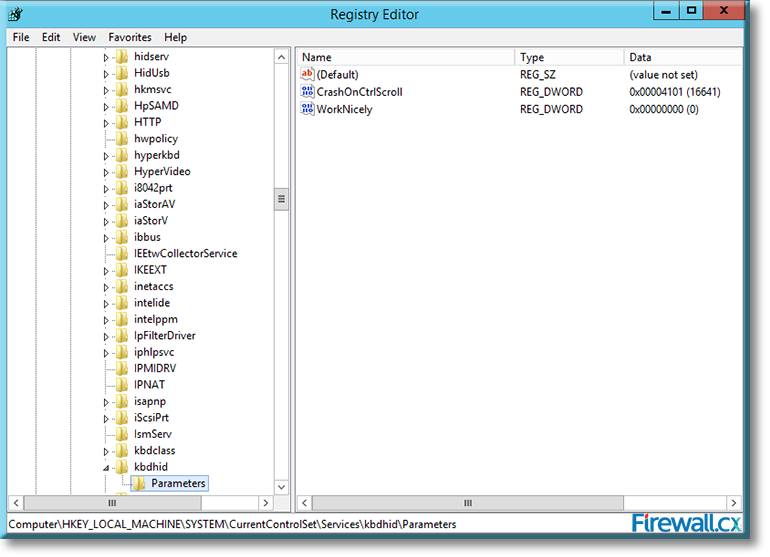 In the Edit DWORD Value dialog that opens, enter Value data as 1 and click on OK: 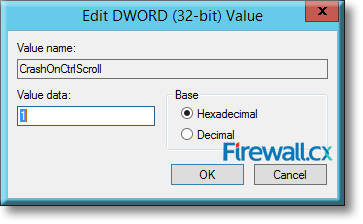 Restart the server for the new values to take effect.

Next, to crash the server, press the combination of keys:

The server will crash and restart and should have created a new dump file.