Chances are we’ve all needed to upgrade our Cisco’s device IOS software at some point. While upgrading the IOS software on a Cisco device is considered to be a fairly simple process, it can turn out to be a very stressful and destructive process if something goes wrong, especially if the upgrade is being performed on a remote Cisco device. Uploading a corrupt IOS image or having it become corrupt during the upload process is a common problem Cisco engineers encounter.

If a corrupted IOS image is not identified before the reload/reboot of the device, it’s most likely the device will not boot again unless a special recovery procedure is followed. A corrupt IOS image translates to network downtime, service disruption and possibly financial loss for the company.

Therefore verifying an IOS image that has been uploaded to a Cisco device is a very important step, regardless how experienced one might be.  Unfortunately most network engineers skip or are totally unaware of the image verification process and the trouble it can help them avoid.

Here are a few reasons why Cisco IOS image verification should become a mandatory step during any upgrade:

The MD5 File Validation feature was added in Cisco IOS Software Releases 12.2(4)T and 12.0(22)S onwards. This feature allows the administrator to calculate the MD5 hash of a Cisco IOS software image previously loaded on a device's flash.

Newer IOS images and ISR routers now make use of the SHA2 algorithm, rather than the older MD5, however we can optionally verify the image using MD5.

Cisco publishes the MD5 hash value (Checksum) for every software image in their download area. This enables the network engineer to easily check and compare the calculated MD5 hash value against Cisco’s site and identify any signs of tampering.

Note: The commands might slightly differ depending on the device you are working on (Cisco Router or Catalyst Switch) and the running version of the IOS software.

Before changing the device’s configuration to load the newly uploaded IOS image, we need to verify its integrity first by using the verify command:

When issuing the verify command, the router will compute and automatically verify the image using the SHA2 algorithm and then compare it against the embedded SHA2 hash.  This verification ensures that the file is not corrupt and has not been tampered with.

To verify the image using MD5, we can use the verify /md5 command as shown below:

As noted in our previously, an additional security check is available for those seeking to fully satisfy their security concerns. Cisco makes the MD5 hash available for every image in their download section, allowing the network engineer to compare the embedded and calculated MD5 hash with Cisco.

Using our image c2900-universalk9-mz.SPA.152-4.M6a.bin as an example, we went to Cisco’s download section and located the file. By simply placing our mouse cursor above the filename, a popup window appeared showing the file details where the MD5 Checksum can also be found: 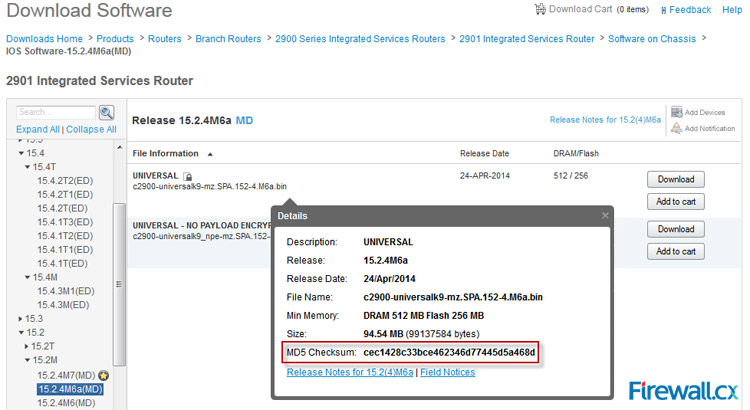 Our calculated MD5 checksum was also cec1428c33bce462346d77445d5a468d, which means we have a Cisco original image that has not been altered or tampered in any way.

This article explained the importance of verifying a Cisco IOS image and the problems this simple step can help avoid. We also explained how to verify the image using the SHA2 or MD5 algorithm and compare it against Cisco’s website.