Through sophisticated software and hardware options (modules), the ASA’s 5500-X series Firewalls support a number of greatly advanced next-generation security features that sets them apart.These include:

Our previous article examined Cisco’s ASA 5500 series Firewall hardware modules, which include the Content Security CSC-SSM & Intrusion Prevention System (IPS) / Intrusion Detection System (IDS) AIP-SCC / AIP-SSM modules. While these solutions are no longer sold by Cisco, they have been widely deployed in data centers and corporate networks around the world and will be supported by Cisco until 2018.

Since Cisco’s announcement back in 2013 regarding the discontinuation of its ASA 5500 series firewall appliances in favour of the newer 5500-X Next Generation Firewalls, customers have been contemplating when to upgrade to the newer 5500-X series. Given the fact that Cisco is no longer providing major firmware upgrades to the older ASA 5500 series and the appearance of new advanced security threats and malware (e.g ransomware), it is now considered imperative to upgrade to the newer platform so that security is maintained at the highest possible level.

Customers seeking advanced protection are likely to consider expanding their ASA Firewall capabilities with the purchase of an IPS module, CX Context-aware or FirePOWER services.

Figure 1. The Cisco FirePOWER hardware module for the ASA-5585-X Firewall

The diagram below shows key security features provided by most Cisco ASA Firewall appliances. Features such as Clustering, High Availability, Network profiling, Identity-Policy Control, VPN and advanced access lists have until today been fairly standard offerings across the ASA Firewall series, however, the newer 5500-X can now offer the additional FirePOWER services marked in red below:

While most of these additional FirePOWER services are subscription based, meaning companies will need to fork out additional money, they do offer significant protection and control and help to reduce administrative complexity. 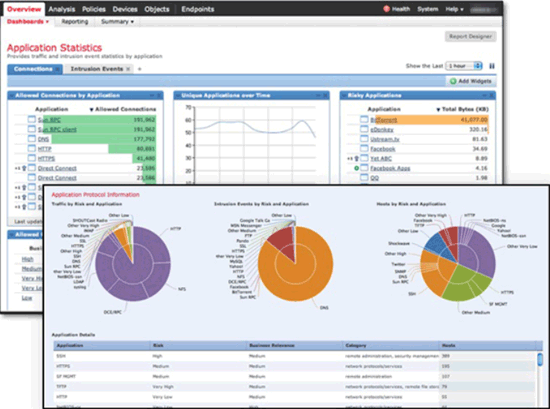 It’s evident that Cisco is marketing its ASA 5500-X series with FirePOWER services as its flagship network security & threat protection solution, which is why Firewall.cx will be covering the Cisco FirePOWER & FireSIGHT Management Center configuration in great depth in upcoming articles.

Back to Cisco ASA Firewall Section