Work transformation is not 'one and done,'" says  IDC's vice president, Holly Muscolino. Most enterprises understand that a hybrid workforce is the future, but they are finding the transformation difficult. To make it easy for the enterprises, IDC has come up with Branch of One - a concept that will last long beyond the pandemic.

To explain the concept to you, ManageEngine is conducting a webinar with IDC's Mark Leary. His insights on preparing your IT for the future will cover key aspects of Branch of One, such as devising robust connectivity, improved collaboration, enhanced security and ease of cloud migration in a hybrid work culture. Leary will also be revealing how technologies like SD WAN and Zero Trust will have a major impact on the future of IT. 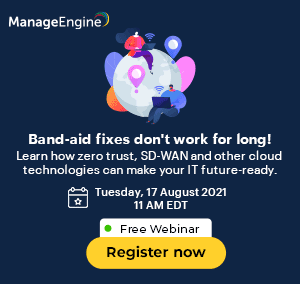 Join our webinar to know more about Branch of One, and optimizing your IT!

Microsoft 365 is an incredibly powerful software suite for businesses, but it is becoming increasingly targeted by people trying to steal your data. The good news is that there are plenty of ways admins can fight back and safeguard their Microsoft 365 infrastructure against attack. 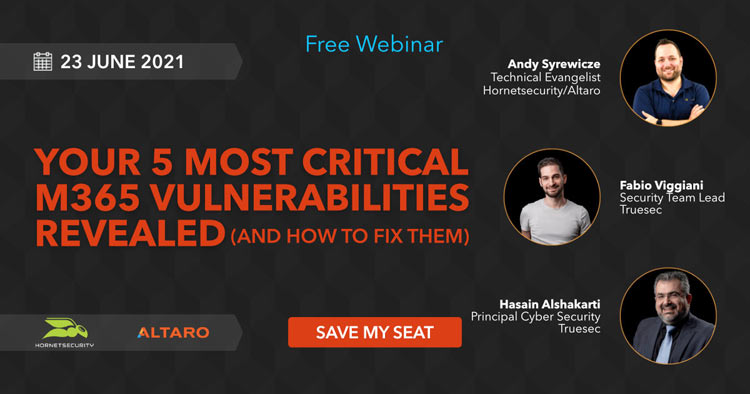 This free upcoming webinar, on June 23 and produced by Hornetsecurity/Altaro, features two enterprise security experts from the leading security consultancy Treusec - Security Team Leader Fabio Viggiani and Principal Cyber Security Advisor Hasain Alshakarti. They will explain the 5 most critical vulnerabilities in your M365 environment and what you can do to mitigate the risks they pose. To help attendees fully understand the situation, a series of live demonstrations will be performed to reveal the threats and their solutions covering:

This is truly an unmissable event for all Microsoft 365 admins!

The webinar will be presented live twice on June 23 to enable as many people as possible to join the event live and ask questions directly to the expert panel of presenters. It will be presented at 2pm CEST/8am EDT/5am PDT and 7pm CEST/1pm EDT/10am PDT.

There are only 1000 seats available for each Webinar. Don’t miss out - Save your seat now! 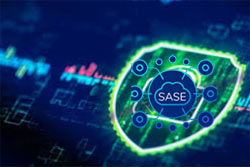 The Free Backup Bible Complete Edition written by backup expert and Microsoft MVP Eric Siron, is comprised of 200+ pages of actionable content divided into 3 core parts, including 11 customizable templates enabling you to create your own personalized on-prem and cloud-based (AWS, Azure) backup strategy.

Part 1 and 2 are updated versions of previously released eBooks (Creating a Backup & Disaster Recovery Strategy and Backup Best Practices in Action) but Part 3 is a brand-new section on disaster recovery (Disaster Recovery & Business Continuity Blueprint) that includes tons of valuable insights into the process of gathering organizational information required to build a DR plan and how to carry it out in practical terms.

The Backup Bible is offered Free and is available for download here.

Part 1 covers the fundamentals of backup and tactics that will help you understand your unique backup requirements. You'll learn how to:

Part 2 shows you what an exceptional backup looks like on a daily basis and the steps you need to get there, including:

Part 3 guides you through the process of creating a reliable disaster recovery strategy based on your own business continuity requirements, covering: 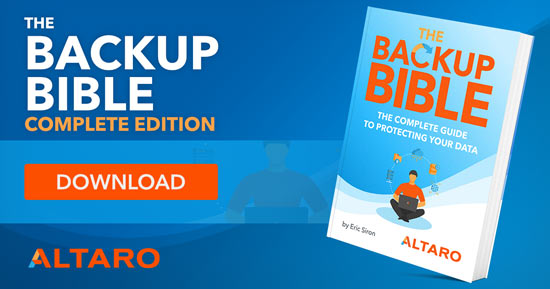 ManageEngine continues its commitment to help IT staff around the globe manage their organization's endpoints and the IT operations for the remote and on-site workforce.

The below Free seminars running during 24th-30th March 2021 are designed to help IT Professionals, and IT Managers identify and solve simple or complex challenges in Endpoint Management and IT Operations Management.  Learn about the strategies used by large and small organizations worldwide to efficiently manage their remote workforce while simultaneously taking on problems like remote security, infrastructure preparation, upgrades, mitigating existing issues, and much more.

Seminars are repeated throughout March 2021 to cover different time zones and allow participants to attend both tracks.

Seats are limited, so make sure you register now!