The Serial Direct Connection is the one which utilizes the COM ports of your computers. Every computer has at least two COM ports, COM1 and COM2. The "COM" stands for "Communications". Its pinouts are a lot simpler when compared to the parallel port, but the speed is also a lot slower.

To give you an idea of how fast (or slow) a serial port is, at its best you will get around 12 to 14 KB per second. That's pretty slow when you're used to a network connection, but let me show you how serial data is transferred so you can also understand why it's a lot slower:

The above picture gives you an idea on how serial data is transferred. Each colored block that is numbered is sent from PC 1 to PC 2. PC 2 will receive the data in the same order it was sent, in other words it will receive data block 1 first and then 2, all the way to block 7. This is a pretty good representation of data flow in a serial cable. Serial ports transmit data sequentially over one pair of wires (the rest of the wires are used to control the transfer).

Another way you can think of it is like a one lane road where the road is wide enough to only fit one car at a time (one data block at a time in our example above) so you would imagine that the road cannot process several cars at one time.

Let's have a look at a serial port to see what we are talking about:

Different pinouts are used for the DB-9 and DB-25 connectors and we will have a look at them in a moment. Let's just have another quick look at the COM ports of a new computer: 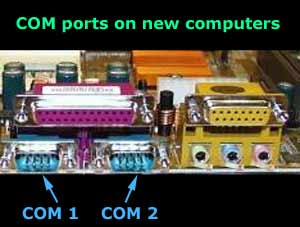 Notice the COM ports, they are both DB-9 connectors, there is no more DB-25! The connector above the two blue COM ports is an LPT or Parallel port. 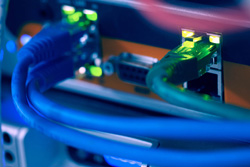 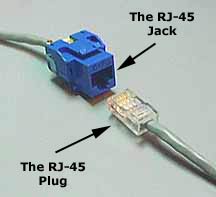